I recently had the privilege of trying out the brand new chalk from Taom, the V10.

About me: I would say that I am an ordinary club player. With a highest break of 58 and being 64 years old I don’t really have any expectations as far as snooker goes. I just love the game and play as much as I can.

For reference: My cue is a Precision one-piece maple and I use a 10mm Century G3 tip.

I’ve been using Pyro recently and have to say I love it! But before I started using the Pyro I preferred Master chalk to any of the other Taom ones. I tried the original, Taom 2 and the soft. They were just not for me. I thought I would give the Pyro a try after seeing so many use it and rave about it. I have to say it’s much better than Master or any other chalk I’ve tried.

When the V10 arrived I didn’t expect anything to be that much different to the Pyro, other than the colour. I had asked recently if V10 was just green Pyro, but Joonas Ohtonen of Taom said it’s…

Normally, I would only try a new chalk on a new tip, as the old chalk might affect the way the new one goes on. But for now I decided I didn’t want to change my tip and would just sand it down a bit before using the V10. I took off as much of the Pyro as I could.

The V10 went on very easily and coated the tip beautifully. Impressive to start with!

But how does it perform?

I went down to the club where I had arranged to meet up with a friend who is a much better player than me and uses Taom 2 at the moment. I asked him to try out the chalk and tell me his honest thoughts about it.

We started playing and after a while, we both noticed that we were getting much better grip on the cue ball. The chalk was staying on the tip, no marks on the cue ball and no mess on the table. What more could you want from a chalk?

Comments from others who tried out the V10:

“Brilliant. Covers the tip great and grips really well. Plays great at both snooker and pool. I thought the Pyro was good, but this is even better”

“I have been using the Taom 2.0 and that has been brilliant for reducing kicks, and personally I was able to get more backspin with that. But the V10 was even better, no kicks, no marks left on the cueball or the table, and the spin you can get is incredible.“

A great chalk for pool and snooker players!

As a pool player first and foremost, the first thing I noticed with the new v10 from Taom was how well it covered the tip. I have used the gold soft Taom and Pyro, but the improvement was noticeable.

Secondly, similar to the pyro, there was very few marks left on the table after 30 minutes play. Throughout play, I never had a single kick. Contact was very consistent, without the need for excessive chalking. Good grip on long pots and deep screw shots. I did get 1 mis-cue later in the day.

Overall, I would say this chalk is the best on the market. Equal to Pyro for pool, but all round it is the best version and helps breed confidence in play.

Note: This is an independent review. Taom did send me the chalk to try out but I don’t get paid for this review. 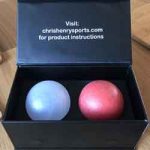 A Review of The Balls from Chris Henry Sports

Read more from the "Review" category