Evans is the Master – again! 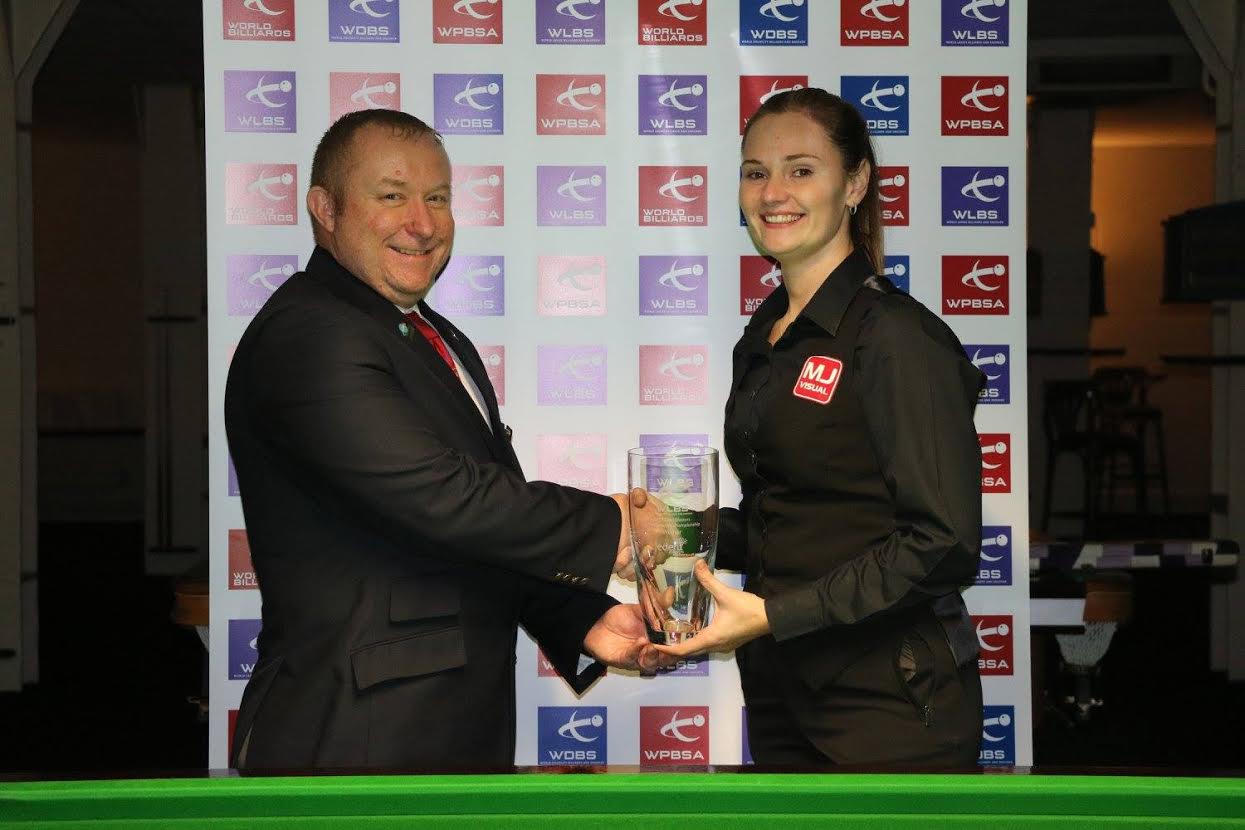 World women’s number one Reanne Evans captured her fourth Eden Masters title yesterday with a dominant 4-0 victory against So Man Yan in the final.

The 11-time world women’s champion made smooth progress through the draw with victories against Aimee Benn, Vicky Shirley and Laura Evans in the knockout stages without the loss of a frame.

Her opponent, Hong Kong’s So, defeated Rebecca Granger, Suzie Opacic and in the semi-finals compatriot Jaique Ip Wan In (who had earlier defeated second seeded Ng On Yee in the last eight), to reach her second WLBS ranking final following the 2012 Agnes Davies Memorial.

Evans, who earlier in the day had made an event high break of 107 during the quarter-finals, would prove too strong for So in the final however, completing the tournament with an unblemished record of 20 frames won from 20 played.

The title represents her second ranking event success during the 2016/17 season, following victory at the UK Ladies Championship last October and is her fourth Eden Masters crown (2013, 2015×2) since the event was first staged four years ago.

“It always feels great to win a title,” said Evans, who with her first title of 2017 has now won at least one WLBS title during each of the last 14 years. “It was a long day but my game was solid all tournament and I was happy with my concentration throughout the day.

“This one is for Brownie, we are all thinking about her and can’t wait to see her back fit and playing again soon. It is another big reminder that all women need to remember to check their breasts regularly because it really could save your life.

“Thank you also to our sponsors Eden Resources who continue to play a big part in support women’s snooker with their backing of this event and the upcoming World Championship in Singapore.”

For So Man Yan despite defeat to Evans, her final run represents another strong event following her return to the circuit at the previous event in Leeds, where she claimed the Challenge Cup title. She is now set to climb further up the rankings from her current position of 16th when the list is revised following the tournament.

Both Chai and Toh will next be in action at the Eden World Women’s Snooker Championship, which will be held in their home country from 13-19 March 2017.

Portsmouth’s Chloe White claimed her first under-21 title with a 3-2 victory against Shannon Metcalf. White, who competed in her first WLBS tournament at the UK Ladies Championship earlier this season, won a tense deciding frame on the final pink for victory and was presented with her trophy by WPBSA Chairman Jason Ferguson.

The Seniors competition was won by Jenny Poulter, who won her repeat final with Sharon Kaur following their meeting at the UK Ladies Championship.

The next tournament of the 2016/17 WLBS Women’s World Ranking Series will be the Connie Gough Trophy, which will on 18 February 2017 at the Dunstable Snooker Club.